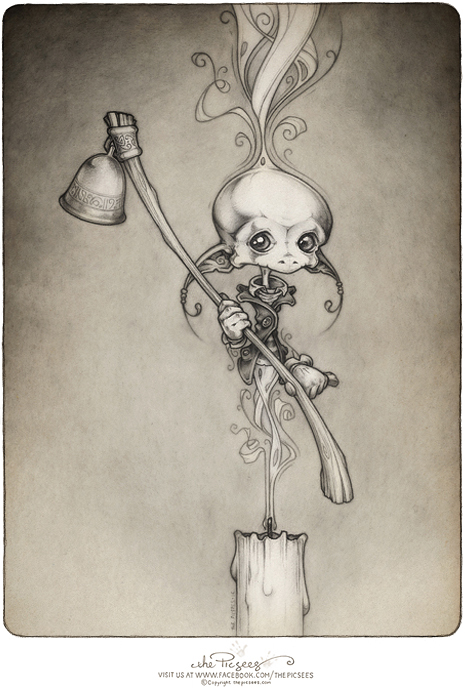 "The Candle Ghosts"
a drawing by the Picsees

We made this wee picture for Halloween casue we thought it would be the perfect time to introduce you to some smokey little spectres that you've probably seen before...although you might not have realised that you did. They visit hundreds upon thousands of dwellings every day, and they've most certainly visited your home upon a time or two (especially if you recently celebrated a birthday with some cake and candles). Those of you who are aware of their work will probably know them as the "candle ghost" or "dim reapers", but we call them the "wee smokies".

Don't worry though, there's absolutely no need to be afraid...even in light of the fact that we just told you wee phantoms pay regular visits to your home (truth be told, oodles of wee folk does...it's the goblins you want to worry about, not the ghosties). Wee smokies are actually quite nice and always very polite. In fact, the only scary thing about them would be if they did not show up...

You see, when you blow out a candle most people think the flame just disappears...but very few things in this world just disappear into thin air, and neither does a flame. No, they are actually all collected by the wee smokies who take them back home to feed the wee dragon pups so they can grow big and strong...which, if you think about it, makes a lot more sense than thousands of flames just magically disappearing without a trace.

And this is a very good thing. Otherwise, once lit, a candle's flame would just keep on burning forever. If you were to blow out a candle without a wee smokie around, you would just end up blowing the flame right across the room where it will start to burn whatever is closest to it...which would leave you surrounded by a smouldering shambles for sure!

So the next time you blow out a candle, keep a close eye on the wee pillar of smoke rising from it, because as soon as it starts spiralling about, the wee smokie has arrived. And with a well trained eye and just a touch of believe and imagination, you should be able to see the shape of the little guy as the smoke dances around him.