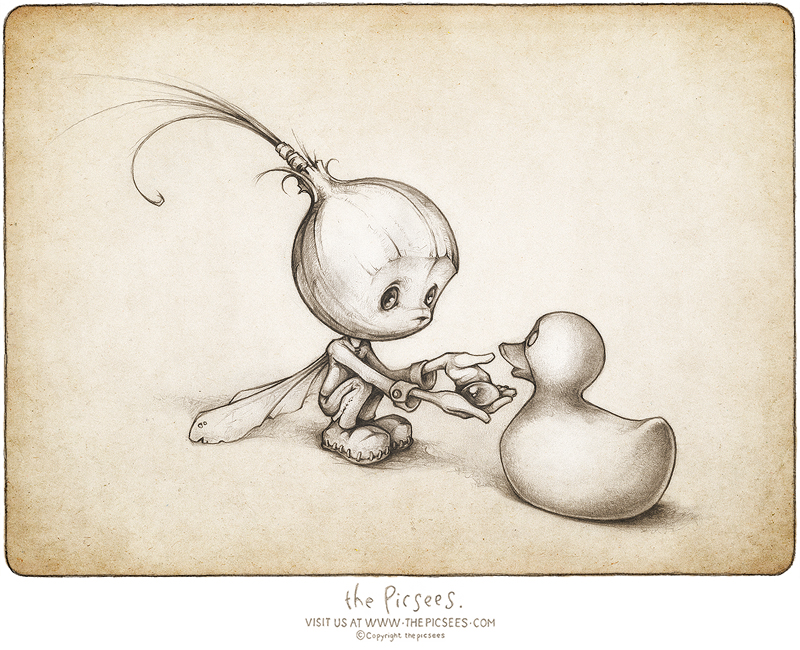 "A wee drink of water"
a picture by the Picsees

If you met the Brown Onion Brownies you will know just how lovely these wee fellies are and how they love to go round to every house and see where they can give a bit of help. For instance, if you leave the kitchen in a bit of a mess, but then, the next morning, it doesn't look quite as bad as you remembered...it was most probably the brownies that did a bit of tidying! Or if you can't find your pencil and then two minutes later its right there on the table....that will be them again! And if one day, you forgot to water the pot plants, they will even help with that...but they don't visit every day so you mustn't forget again!

But what most people don't know is that they do sometimes get a little bit confused...like for instance - they don't always know the difference between a toy animal and a real animal (they think toys are just very very shy) and you will quite often find one of them talking to a toy for hours on end, or even giving them some food or snacks!

We once saw one of them trying to feed a whole jar of honey to a teddy bear and only yesterday there was one who tried all morning to give a drop of drinky water to a rubber ducky! We made this picture of him specially so you can see...and don't worry, we explained the difference to him and he now know that toys are the ones that are always neatly packed away in the bedroom....but if a toy is left on the floor don't be surprised if you find some crumbs on their face ~:D