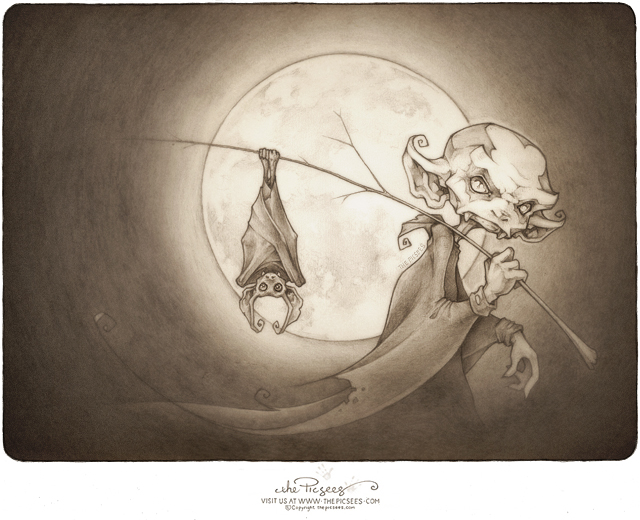 We made this picture for Halloween and as you probably know that's one of our favourite days of the year! It's the one time when faeryfolk, human beans and monsters all get along. No one runs away screaming, No angry mobs...just some tricks and some treats ~:)

If you go out tomorrow after the sun's gone down you are sure to see every creature and critter imaginable roaming the streets, looking for sweets and having a good old time! Well...actually not every creature and critter...you probably won't see the wee vampires (not to be confused with big vampires like Dracula). They can't come cause they are babysitting bat pups.

You see, this is the time of year that most bats fly off to go find a place to hibernate for the winter. The legend says if a bat is seen flying around after the break of dawn on the day after Halloween they will turn into birds, and if there's one thing a bat does not want to be it's a bird! Now, while most of the wee baby bat pups can fly off with their parents to their winter homes, there's always one or two little late bloomers that can't even flap their wings yet. This would be a very problematic time for these wee pups since all the other bats has to leave...but lucky for them there's the Vampires. For as long as anyone can remember the Vampires has been looking after these wee bat pups during the winter months until their family wakes up around march the next year. This is why Vampires and bats are such good friends. Many of them were raised by the Vampires so they are actually more like family.

But raising a bat pup is not an easy job. Luckily, the legend that turns bats into birds only last until the new year, but until then none of the wee pups can be taught to fly* and if you know bats you will know they are useless at walking. This means that they have to be carried everywhere they want to go, and they want to go all the time! So the poor vampires doesn't get much sleep (Most people think wee vampires are nocturnal, but they actually love to sleep at night...it's the pups that keeps them up all night.)

This means if you do happen to see one they're most likely to be very tired and quite grumpy...so it's best to avoid them! Even though they are little they do bite! But don't worry though...it's not as bad as when a big vampire bites you. It's usually a bit itchy like a mosquito bite. Also you might get a mild case of the wakeys (or sleeplessness) and you probably won't be able to eat garlic for a week but after that you'll be ok. but still....best to avoid them ~:)

*from the very first day of the new year bats can fly again without the fear of becoming a bird so from then they will all go to Lady Rosafae's flying school for her special "midnight flight with batnav" classes (you can read about her school in the post below) so that they can be expert flyers by the time the other bats return.

you can download a high-resolution colouring page of this picture (along with lots of other exclusive items) when you become a Patron of the Picsees with archive access at: www.patreon.com/thepicsees 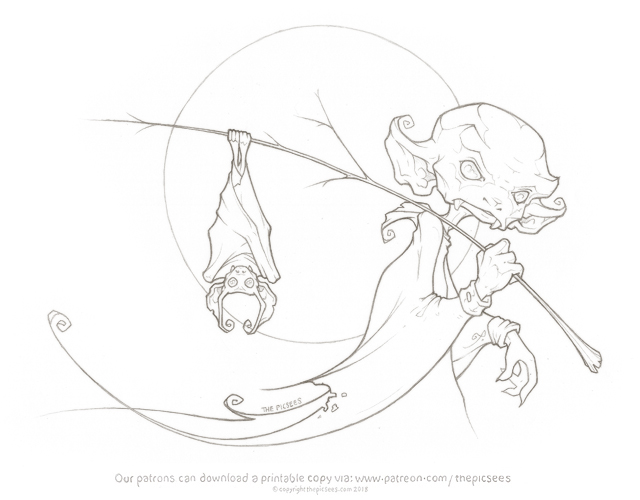