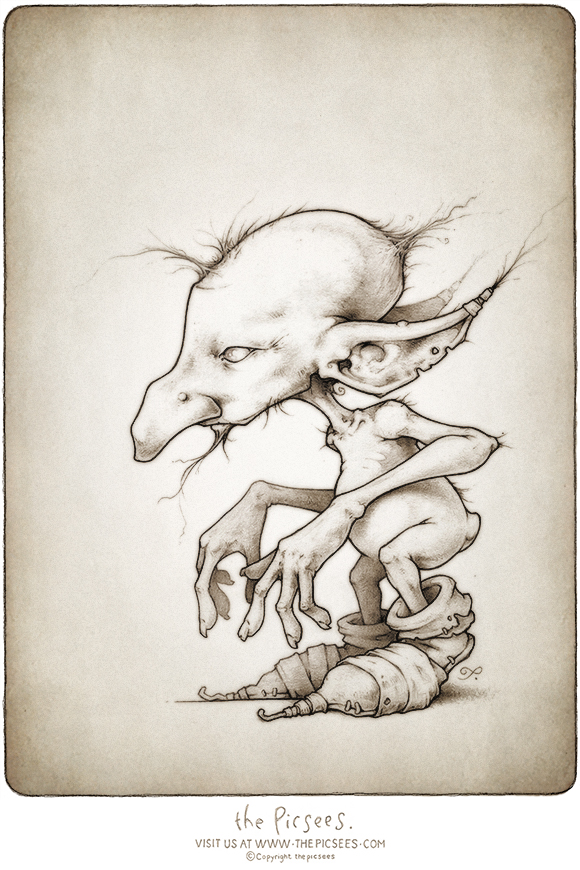 This is our latest art picture and also our very first public service announcement. You see, we've found three of these wee goblins in the kitchen over the past couple of weeks and decided to make an emergency drawing of them so that we could show you how they look and tell you what to do if you happen upon one of them too.

They are called Ta'ygaird goblins (which roughly translates to 'the potato guards') and it's usually quite rare to see one of them because they spend most of the time deep underground. However, for a few months of the year they can be found in an around the tattie (potato) and neep (turnip) fields where they guard the crops at night. This will usually consist of them digging up grubs, removing bugs and caterpillars and chasing away the occasional rodent who's looking for a rooty snack. The problem is that they dig little hollows between the tatties and neeps where they will sleep during the daylight hours and when the harvesters come round some of them get scooped up with the year's crops. Luckily they are tough as nails and don't get hurt when this happens, but it does mean whenever you buy a bag of tatties you might well find the occasional goblin in it...and this can cause problems. Don't worry though, they are mostly harmless...but if you're getting supper ready and happened to grab one of them instead of a tattie they will let out a terrible shriek that will leave your ears ringing for at least a week...and if you don't let them go right away they might even bite, which can be quite sore. This can easily be avoided by opening the tattie bag and letting a wee bit of light in before taking out any tatties for your stew. The reason this works is because they spend most of their lives underground and therefore they really don't like any light, so when you do this they will scurry straight to the bottom of the bag where it's nice and dark, and you can safely take out a tattie or two from the top.

However, this is not actually the problem we were talking about. You see, they will eventually try to find their way back to the other goblins and will end up making lots of little holes in your floor in an attempt to dig their way out. So, if you suspect that there might be one of them in your kitchen cupboard or pantry it's advisable to help them get back outside as soon as possible, if not for their sake, then for the sake of your floor.

Luckily for you, this is quite easy to do. All you need is to find a medium sized cardboard box (an old shoe box will do just fine) and fill it about 3/4 with some soil from the garden or park. Once this is done take a wee tattie from the bag (remember to let in a bit of light before you do), place it on the surface of the soil and put the box in the darkest corner of the room. They can smell a morsel of dirt from a mile away and will make their way to the box over the next day or two and start to burrow as soon as they do. They are neither fast nor efficient and will only dig a basic hollow on the first night. The important thing for you to note is the fact that they will always take the tattie with them so just check the box every morning and if the tattie is gone you know their escape plan is in full swing. The only thing that's left for you to do is to carefully pick up the box, take it outside and leave it there overnight. They will burrow through it into the ground and tunnel till they find their kin, and just like that things will be back to normal again.